NEPTUNE and PLUTO, Dynamic Duo in the Drama 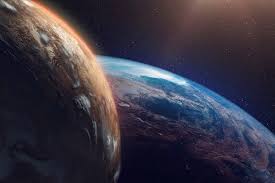 Wintertime is when the Sun and inner planets transit the last and first houses of the Alchemical Tantric Arrangement at the cusp between Capricorn and Aquarius, which I call the Chiron/Kundalini Portal.

I have pointed out that the purification of the seven alchemical metals from lead at the first or Root Chakra, up to the gold of the seventh or Crown Chakra and the ascent of kundalini energy upward through the seven chakras. This movement correlates with the ascending signs from the cusp of Aquarius to the cusp of Leo.  HOWEVER, when we focus on the flow of the breath, there is both an inhalation upwards, AND a return exhalation as we descend through the signs from the cusp of Leo at the top of the breath to the cusp of Aquarius at the bottom.

Hence, similarly it can be said that the cycle of every planet follows this same pattern of the breath around the twelve signs of the zodiac, inhaling up to the top of the ATA chart and exhaling back down to the bottom.  This puts a special emphasis on the role of Capricorn as the twelfth Hermetic sign and the sign where exhalation is completed.

Thus, Capricorn is a key player in the ATA cycle.   It falls on this sign of the Seagoat to complete the cycle – to completely empty the lungs as it were, so that they can be adequately refilled with new fresh air in the sign of Aquarius.

Calmness of mind is beyond the end of your exhalation. If you exhale completely, without even trying to exhale, you are entering into the complete perfect calmness of your mind.  You do not exist anymore . . . We feel free to express ourselves because we are ready to fade into emptiness.  Not always so, p. 5-7

The sign Capricorn also stands out because it happens to contain the south node of three rather notable planets, all of which just happened to transit through Capricorn in 2020: Jupiter, Saturn, and Pluto!

One more fun fact about Capricorn relates to the myth of the Seagoat Pricus, the image related to this sign.  Pricus with his family of highly intelligent Seagoats lived near the shore.  They liked to go ashore, but when they spent too much time on land, they lost their intelligence and became regular goats.  Pricus, being a child of Cronos, had an ability to manipulate time, and he would set back time so that his children would be returned to the sea.  But alas, they continued to return to land, and finally Pricus gave up and was placed in the heavens as the constellation Capricorn.  I read this myth as a reference to Capricorn’s special connection to evolution/de-evolution, time, and the necessity of change.

Perhaps being a double Scorpio (Sun and Moon) I think Pluto is a very large elephant in our present living room.  Pluto is transiting the end of Capricorn, completing the American Revolution cycle of 250 years before moving into Aquarius.  Like the 2020 transits of a large gang of planets through this sign of the Seagoat, Pluto’s transits in 2023-2024 will likely correlate with another huge evolutionary quantum jump related to the Chiron/Kundalini portal of ATA.  Pluto is the planet of the apocalypse, a word that means “to take off the masks!”  I sometimes view Pluto as related to the Hindu goddesses Kali and Durga, who like their partner Shiva, need to destroy the old so that the new can be born.

I think it is safe to say that Pluto’s entrance into Aquarius will add considerably to the “Dawning of the Age of Aquarius,” especially since gigantic Jupiter and Saturn have recently transited this same cusp.  All of the outer planets will then be on one side of the ATA chart, the in-breath accumulating, Ida Nadi side of the zodiac.  Whatever is the exact beginning of the Age of Aquarius, it will surely occur in this next 250 year cycle and most likely in the next half cycle of 125 years, when Pluto will reach Leo at the top of the ATA chart.

In terms of the prevalence of Aquarian symbolism, it is clear that the transition between the Great Ages from Pisces to Aquarius is well underway and Pluto’s entrance into Aquarius is a sure sign!

Guess what folks . . . looking around I notice that there are TWO huge elephants in the living room!! Pluto and Neptune are working together (sextile).  Pluto is a final actor in the transition into the Age of Aquarius, and Neptune’s transit through the end of Pisces is likewise resonant with the ending of the Age of Pisces.  Between now and when Neptune leaves Pisces in 2025 we can fathom some of what the remainder of the Age of Pisces will look like. 2026, for example, has a huge impressive stellium in fiery Aries featuring a Chiron Return in the U.S. Sibley fourth house that may represent the Age of Pisces going out with a bang.  Certainly there are indications of the waning of Piscean symbolism in tandem with the rise of Aquarian symbolism, both worldwide but especially in the U.S.

When Neptune leaves Pisces, the Boomer generation and several other generations will have experienced the full transit of all the planets through their home signs — Pluto first entered Scorpio on 5 November, 1983, and Neptune will finally leave Pisces on 26 January, 2026.  I think this is a meaning-full part of the transition of the Great Ages!

Perhaps we have been lucky that Pluto and Neptune have been sextile to each other for many years.  Hence, they have been pointing an impressive transformational Yod or “Finger of God” around much of the zodiac.  They are pointing at my natal Jupiter near the end of Leo these days with their mid-point therefore moving through the end of Aquarius.  Anyone with planets at the end of Leo and Aquarius or the beginning of Virgo and Pisces can expect to feel the profound effects of God/Goddess pointing at you over the next few years!

Both Neptune and Pluto are making rare major aspects to the U.S. Sibley Chart.  Neptune, not known for clarity, is exactly opposite to the U.S. Neptune in Virgo, and Pluto, will be making an exact Pluto return to the U.S. Pluto position at the end of Capricorn.  Of course, for all the many reasons cited above, the symbolism of Pluto, divinity of the Apocalypse, making FIVE passages over the potent portal at the end of Capricorn is, at the very least, ominous!

Do we dare mention the upcoming 2022 and 2024 U.S. elections with both elephants and donkeys in the living room?  In addition to Neptune and Pluto, add several more significant transits in the U.S. Sibley chart including the U.S. Nodes, Moon, and Chiron/Saturn opposition including the Chiron return mentioned above in 2026!  It appears that the “Living Room” may soon qualify as a zoo!  Ha!

Please provide your birth details for the reading.